Sherwood Forest Hospitals has been named as the best Trust in the East Midlands for recognising and treating patients who have had a stroke.

The Trust is now the 8th best in the country after being given an A rating by the Sentinel Stroke National Audit Programme (SSNAP) for the way it handles patients suspected of having a stroke.

Stroke Matron and Divisional Governance Lead, Adam Hayward said: “We are extremely proud to announce that our patients are receiving the best stroke care in the East Midlands, this is all thanks to the dedication of the team here on the stroke unit, who have all worked really hard to get us to this level and they should be really proud.”

Andrew Stewart who suffered a stroke in November last year at the young age of 47, speaks very highly of the team who got him on the road to recovery. He said: “It was a really scary experience having a stroke so early on in my life, it’s not something you expect to happen, but the team were fantastic. After just one day on the stroke ward, the physiotherapists came and spoke to me about physiotherapy and worked out a bespoke rehabilitation plan for me. I’m a very active person with a busy family life, so I was keen to get back to full strength as soon as possible, which the team really took on board and helped me with.

“When it happened, it was just a normal day for me, I’d been on the school run and had taken my son to his usual rugby practice, coming back I felt really tired, but didn’t really think much of it. Then throughout the evening I kept misjudging distances on my right side and my right shoulder hurt, but again, I just put this down to sleeping awkwardly on it and being tired. But when I woke up the next morning, I couldn’t get out of bed on my right side. That’s when I knew something was really wrong.

“I got to A&E and the team started doing tests to see if I had had a stroke. At that point I still didn’t really believe I had. It only really sunk in when a nurse on the A&E team tried to get me to stand up straight and I realised that I couldn’t, that’s when I slowly started to accept it.

“I was then transferred to the stroke unit, where I was given daily medication and a lot of care to assess my limitations and see what therapy I needed. I was then discharged on the Monday and was visited by the therapy team six days a week for 4-5 weeks. They were brilliant and gave me really practical exercises to do which I could relate to. They even supported my wife and came to see her specifically to see how she was getting on and dealing with things. That really meant a lot to us. Even after the therapy team left me, they said I could contact them at any point and I felt like I still had their support whenever I needed it. I really did feel looked after.

“Since being discharged I have gone from strength to strength and even played a game of rugby the other night. There are still things that I struggle to do, like writing as neatly as I would like to, but I’m hoping things will improve further given time. I can’t thank the stroke team enough for their help and support throughout.” 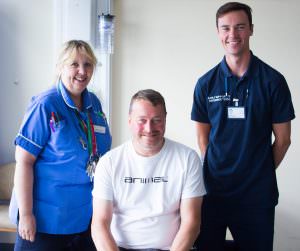 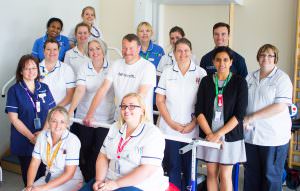 Andrew with the stroke team at King’s Mill Hospital.

This website uses cookies to improve your experience while you navigate through the website. Out of these, the cookies that are categorized as necessary are stored on your browser as they are essential for the working of basic functionalities of the website. We also use third-party cookies that help us analyze and understand how you use this website. These cookies will be stored in your browser only with your consent. You also have the option to opt-out of these cookies. But opting out of some of these cookies may affect your browsing experience.
Necessary Always Enabled
Necessary cookies are absolutely essential for the website to function properly. This category only includes cookies that ensures basic functionalities and security features of the website. These cookies do not store any personal information.
Non-necessary
Any cookies that may not be particularly necessary for the website to function and is used specifically to collect user personal data via analytics, ads, other embedded contents are termed as non-necessary cookies. It is mandatory to procure user consent prior to running these cookies on your website.
SAVE & ACCEPT